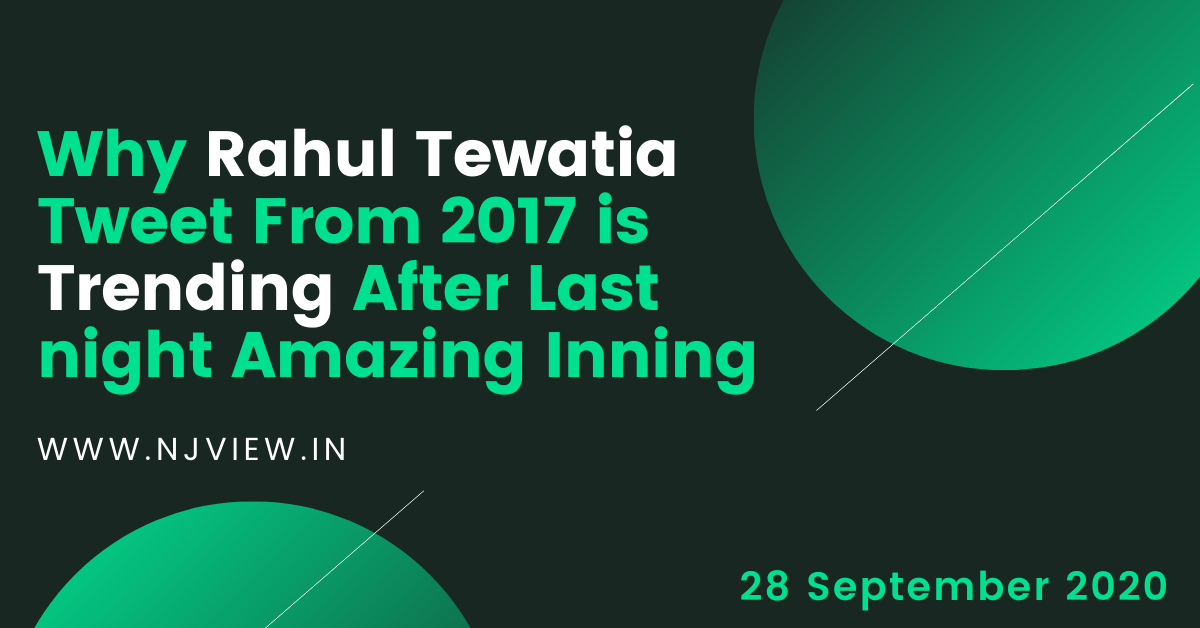 Now This Tweet is Trending as he plays amazing Inning after a very slow start but after he hit 5 sixes in one over and hit fifty to reach the target.

What a redemption. Such is cricket and such is life, changes within minutes.- Virendra Sehwag

It’s not Tewatia’s fault. It Is Not. #RRvKXIP - Aakash Chopra

Before the #Dream11IPL started, I had hoped it would bring a smile to people's faces, even if momentarily, in these times. #RRvsKXIP, a game for the ages, did just that. And @rahultewatia02, you were like a good Hindi movie with the struggle & the happy ending. It was so much fun. - Harsh Bhogle

What a game ..that’s why this is the best league in the world ... amazing talent on display @bcci @IPL. - Saurav Ganguly

Rahul Tewatia becomes a star after this Inning as he also bowls well in the last match.

He helps Rajasthan to win both matches and Reach 2nd position in the points table.

Earlier He also played from 2014 in ipl but he is known for his bowling more than batting but now he also shocks all ipl fans with his batting.

Yesterday in the 9th match of ipl Rajasthan Royals Got a Target of 224 in 20 over.

Rajasthan started with losing important wickets of Buttler. After losing the wicket Samson and Smith Played very well as Both hit fifty.

After losing smith Wicket At 100 run in 10th over Rahul Tewatia came to bat but he started very slow as his team required run rate becomes very high.

At the end of 17th over Rahul Tewatia hit only 8 runs in 19 ball. But in 18th over he hit 5 sixes and Rajasthan Back into the game and win the match.

Sanju Samson becomes a man of the match for his 85 run Inning.

Now Rajasthan Reach at 2nd position in the points table after 2 Consecutive Win.

Now Punjab at 3rd position in Points Table after 1 win and 2 lose in 3 matches.